January 2007
the Indo-Harappan town of Lothal

I wanted to visit one of the Indo-Harappan sites, so Sachin and I took a short detour to the intriguing ancient dock of Lothal on our way to Bhavnagar.

Little is known about what is known at the 'Indus Valley' civilisation, and the script has not yet been deciphered.

The following text is from a sign at the site.

Lothal, meaning the mound of the dead, was discovered in 1954. Excavations conducted here from 1955 to 1962 revealed a well-planned town and sea-port of the Indus (Harappa) civilization flourishing between 2400 and 1900 B.C. when the sea was much closer.

The inhabitants built a dock (216m long x 37m wide), enclosed by a brick wall, 3m high. Originally the ships were sluiced at the tides into the basin through an inlet channel in the northern embankment connected with the river, flowing on the west of the town. The dock and township appear to have been damaged by floods in about 2000 B.C., when the river changed its course, necessitating large-scale repairs and digging of a channel to sluice ships through the inlet in the eastern embankment.

The spillway in the southern embankment through which excess water escaped had a water-locking arrangement. Houses were built in straight rows on 1 to 4m high platforms of mud-bricks as defence against floods.

The acropolis was well-served with underground drains connected with brick-paved baths.

The main street in the lower town seems to have been flanked
by small shops of copper smiths and shell workers.

The houses in street 9, connecting the cemetery with the lower town, are larger in size.

A kiln was attached to a bead-factory situated to the west of the acropolis.

The town was destroyed by frequent floods and had to be abandoned in about 1900 B.C.
but a few Harappans continued to stay up to 1700 B.C.

The seals and sealings, stone weights and metal objects, beads and other ornaments from Lothal
are analogous to those from Harappa and Mohenjo-Daro. 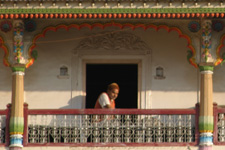 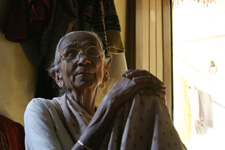